Learn more about suicide and prevention efforts in Oklahoma, including a list of laws enacted in AFSP's top priority areas. Updated: February 4, 2022. 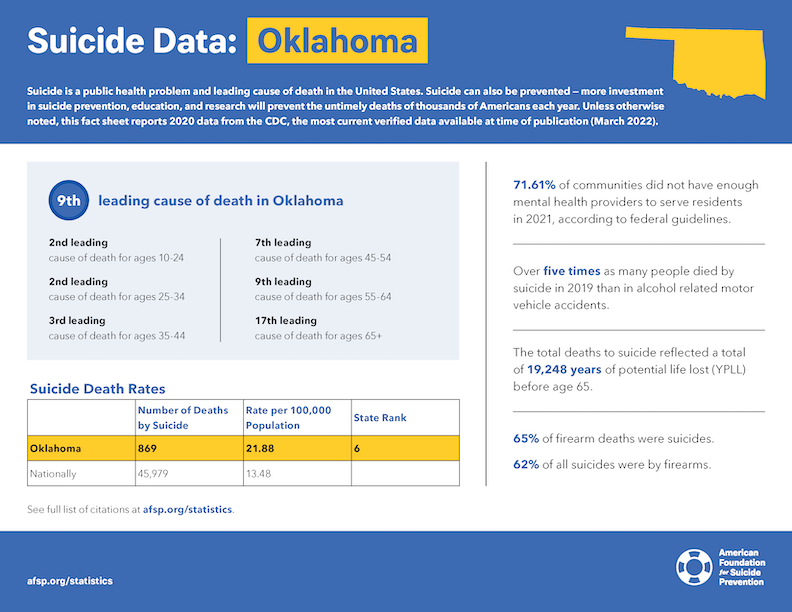 Oklahoma law, via the Suicide Prevention Act, designates the state’s Department of Mental Health and Substance Abuse Services (ODMHSAS) as the lead agency for suicide prevention activities and establishes the Oklahoma Suicide Prevention Council to work in cooperation with the Department (43A Okl. St. §§ 12-101 to 12-105). Originally passed in 2001 as the Youth Suicide Prevention Act and Council, the law was later amended in 2008 and since then state efforts have focused on suicide prevention strategies for all ages and the Council now addresses suicide across the lifespan. In 2015, the Council issued the 2015-2020 Oklahoma Strategy for Suicide Prevention and has since been responsible for overseeing the development of different stages of the strategy and assisting communities in implementing activities to address the specific needs of their population(s). While no longer mandated by state law as of January 1, 2020, the Council continues to operate.

With assistance from ODMHSAS, the Oklahoma State Department of Education maintains a suicide prevention webpage that offers helpful resources on ways constituents can prevent suicide in their local school and community, as well as statistics and reports on youth suicide, including the 2020 Oklahoma Youth and Young Adult Suicide Report issued by the Oklahoma State Department of Health (OSDH) and based on data from the Oklahoma Violent Death Reporting System and 2020 Youth Risk Behavior Survey.