Learn about the American Foundation for Suicide Prevention, and our mission to save lives and bring hope to those affected by suicide.

Save Lives and Bring Hope to Those Affected by Suicide

Established in 1987, the American Foundation for Suicide Prevention (AFSP) is a voluntary health organization that gives those affected by suicide a nationwide community empowered by research, education and advocacy to take action against this leading cause of death.

AFSP is dedicated to saving lives and bringing hope to those affected by suicide, including those who have experienced a loss.  AFSP creates a culture that’s smart about mental health by engaging in the following core strategies:

Led by CEO Robert Gebbia and headquartered in New York, with an Advocacy office in Washington, D.C., AFSP has local chapters in all 50 states and Puerto Rico, with programs and events nationwide. Learn more about AFSP in its latest Annual Report, and join the conversation on suicide prevention by following AFSP on Facebook, Twitter, Instagram, and YouTube. 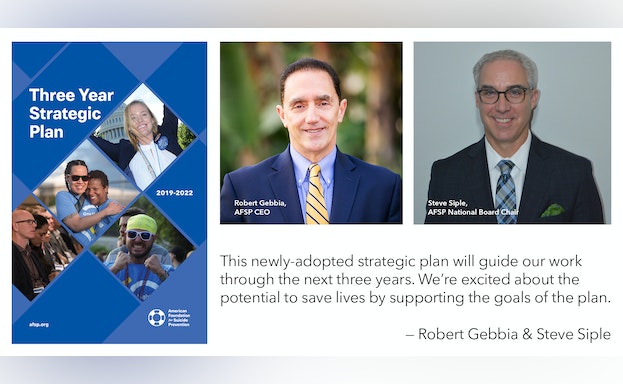 Suicide and mental health issues do not discriminate, and so it is imperative that we take an uncompromisingly anti-racist approach to improve access to culturally informed, evidence-based quality mental health care. We are dedicated to a process of change knowing that long-term, sustained efforts are needed. We have much more work ahead of us and are committed to change our culture and reverse the impact of systemic racism within the field of mental health. We all have a role to play and invite individuals, communities, organizations, and thought leaders to join us in our efforts to create long-lasting changes in mental health equity and to prevent suicide amongst underrepresented communities.

The history of AFSP

In 1987, a small group of caring individuals had a vision: to establish a private source of support for suicide research and education, so that essential suicide prevention efforts could be sustained into the future. These founding families—each of whom had lost someone to suicide—joined with scientists to create what today is the American Foundation for Suicide Prevention, or AFSP.

Many of our original founders were concerned about an alarming rise in youth suicide over the previous four decades. During this period, the suicide of young men had tripled, while for young women it had doubled. Suicide is currently the third leading cause of death among young people age 15 to 24. The highest overall rates of suicide are for adults age 40 to 59.

Before AFSP, there was no national-scope not-for-profit organization dedicated to understanding and preventing suicide through research, education and advocacy.

Learn more about our work

Learn about our national board, councils and committees.