Learn more about suicide and prevention efforts in Vermont, including a list of laws enacted in AFSP's top priority areas. Updated: February 4, 2022. 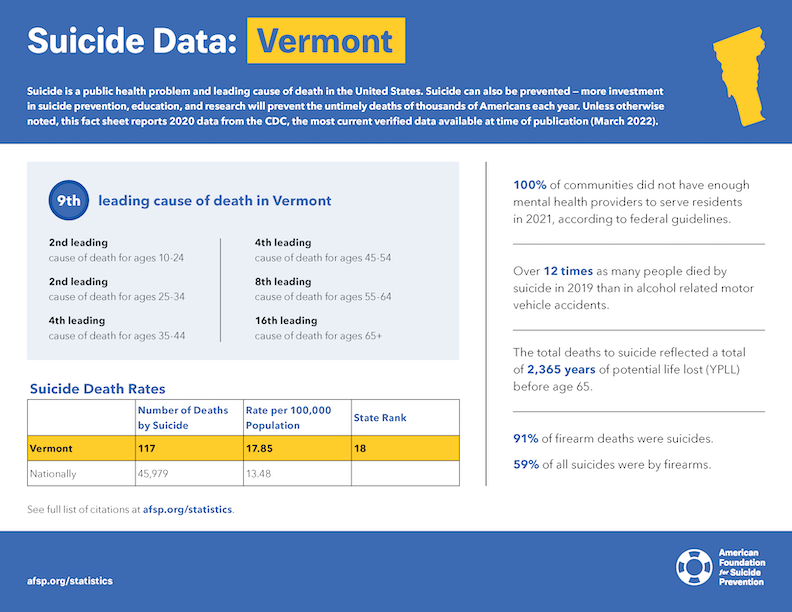 Vermont’s suicide prevention activities are housed within the state’s Agency of Human Services, Department of Mental Health (DMH) and led by the Vermont Suicide Prevention Center (VT-SPC), a program of the Center for Health and Learning created as a public-private partnership with the Agency that serves as a state-wide resource fostering a sustainable approach to suicide prevention in Vermont. State agency leaders, in alliance with VT-SPC, also created a broader group entitled the Vermont Suicide Prevention Coalition (VSPC), a public-private coalition with representation from public health, education, state agencies, advocacy groups, youth leadership, mental health services, and loss survivors, of which AFSP is a part and whose purpose is to advise the VTSPC on suicide prevention efforts.

The Coalition is responsible for implementing the recommendations in the Vermont Suicide Prevention Platform: Working to Prevent Suicide Across the Lifespan, published by the VT-SPC in 2015. In 2017, Act 34 was passed requiring the Secretary of the Agency of Human Services to prepare one-time report on Vermont suicide rates with national comparisons and provide recommendations and an action plan based on those data. The official Suicide Prevention Recommendations report was submitted to the legislature in January 2020.