I was 18 the first time I played a role in saving someone's life from suicide. I had sensed a friend was struggling for several weeks, though they never said out loud they were depressed. At first, I didn’t know what to do, so I just listened to them when they needed someone to talk to.

One of my teachers, in a psychology class I was taking, used materials from the American Foundation for Suicide Prevention to teach us the warning signs for suicide and how to have a direct, honest conversation if you were concerned about someone. Sitting in class that day, I could hardly focus because I could not stop thinking my teacher was describing my friend.

I immediately went to my friend’s dorm, and had a direct, private conversation with them, letting them know I cared. I then helped them find a counselor.

That was 11 years ago, and the person I had a #RealConvo with – and who I led to help – is not only still alive, but living a happy and fulfilling life.

I never expected to interact with AFSP again. But in 2018, someone told me about a job opening with the organization, and all of a sudden, I remembered the impact that small but powerful interaction had made on my life and the life of the person I reached out to that day.

When I started with AFSP, this was my Why for joining the fight to stop suicide. But since 2018 my Why has evolved. When I started sharing AFSP’s messages on social media, I was surprised to see how many people opened up to me. People I’ve known for years. People who I hadn’t spoken to in a while. Family members, and some of my best friends, shared with me stories of their own connection to mental health, and suicide, that they’d never shared before.

But my Why has shifted over time. A little further down the road, I realized I was telling people to prioritize their mental health, but I was not prioritizing my own. I started seeing a therapist. I've learned a lot about myself. I've learned I have generalized anxiety disorder, and have a history of psychological and sexual trauma. I also recalled and processed my own suicidal crisis that I had experienced during college.

Let me unpack that last sentence: I never attempted suicide, nor did I have a plan to. But at one point, I was ambivalent about life. I didn’t care if I lived. I didn't care if I died. Over the course of several weeks, I would think things like, "Well, maybe I won't wake up in the morning, and that would be okay with me," and, “If I died in an accident tomorrow, nobody would really miss me.” I realize now that my thinking had been affected in that moment, and that I could have used help.

Now my Why is not only the person I helped to save when I was 18 – and over a dozen other people close to me who have struggled with depression, anxiety, and/or suicidal ideation. My Why is also me. 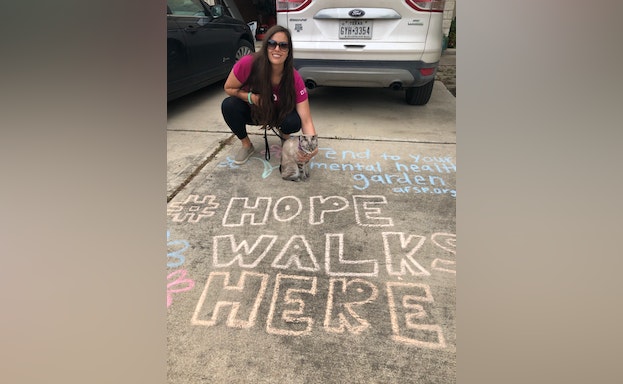 I'm sharing my story because I hope it will help someone. There is always reason for hope, and you can truly help someone just by reaching out to them, listening, letting them know you care, and helping them connect to professional support if they need it. I don’t know if the people who reached out to me when I was struggling knew what they were doing or not. But the people who did things as simple as having dinner with me, inviting me to study together, or simply texting me good morning saved me. The people who just listened saved me. All the small, kind interactions from people who saw me in pain reminded me that people did care about me. Knowing that people would miss me saved me. They reminded me that my life is worth living, and that I could move past the multiple stressful events I was dealing with at the time.

Sharing your story can be scary, and you shouldn't do it until you’re ready. I'm grateful for the dozen or so people in my immediate circle who have come to me to share their story. They are my Why. You are my Why. I am my Why.

Now let's reduce the sense of shame some people still have about mental health and suicide by talking about it, and reaching out to those we are concerned about, because talk truly can save lives.