Holly Chisholm’s workbook My Therapist Told Me to Journal (Oct. 27) is available for preorder now from Skyhorse Publishing.

Many times in my life, I have been the one people reach out to when they’re struggling.

When I was in middle school, one of my friends revealed to me on a hot summer’s day that she had been hurting herself. “I cut myself,” she said simply. Thirteen-year-old me was shocked. I’d never heard of such a thing.

In 7th grade, one of my closest friends reluctantly pulled down her purple and black wrist warmers to show me what she had told her mom were “scratches from walking through brush.” 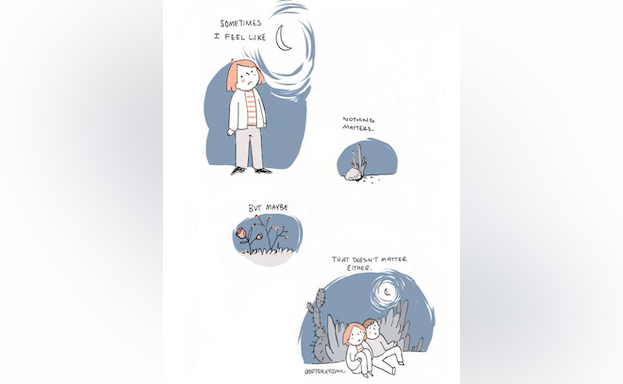 In high school a friend texted me that the previous night he’d had to get his stomach pumped after a suicide attempt.

In college, I missed the phone call of a friend with Bipolar Disorder who attempted suicide later that night.

For a long time, I was really bothered by these encounters, and felt so guilty for not being able to offer any advice, or for not being there in time. I remember middle-school me desperately wanting to help my friends, but not knowing what to do, other than telling my mom what they had said. I mostly felt useless.

Somehow I knew that saying “stop cutting” or “don’t kill yourself” wouldn’t be enough. Another question always in the back of my mind was, Why did they come to me? I don’t know anything.

It took more than a decade before I would start to understand just how brave these people were to reach out at all. 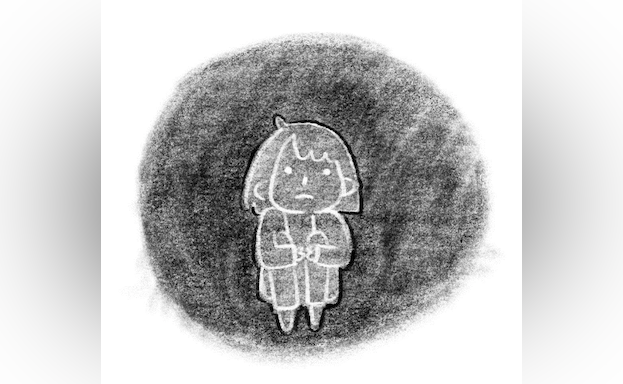 I was 24 when I had my first real thoughts of suicide. I had just started a new medication to help with my ADHD and was drinking heavily. I’d had vaguely suicidal thoughts before, but that night I was truly hopeless. I remember sitting in my tiny apartment in the pitch darkness staring at nothing. If I had been offered an easy way out, I might have ended my life that night.

But I sure as heck wouldn’t have called anyone or reached out for help like my friends had. I feel so grateful that they did because I know now how isolating depression can be.

Around the same time that I was feeling suicidal, I started drawing out my thoughts and feelings, and posting them on Instagram as a comic series about living with depression. I wanted to showcase some of the (admittedly sometimes darker) humor and absurdity in feeling sad or anxious all the time, and appropriately named my series “Just Peachy Comics.”

Just Peachy Comics started out small at first, but now I have been posting comics about mental health for the past four years. It was scary sharing my darkest thoughts with the internet at first, but over time, something exciting started to happen. 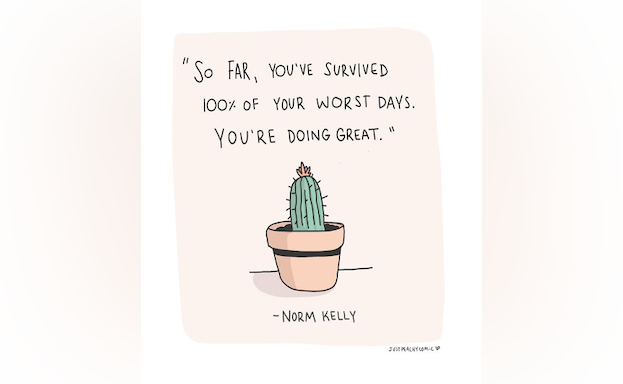 Messages and comments started coming in, saying they had felt the same way. Hundreds of brave strangers have reached out to me asking about struggling with suicide, depression, anxiety, and self-harm. Many people say that my comics have helped them feel less alone in their pain and sadness.

Through my art and the small community of people who follow me, I have embraced my role as the friend you can come to if you find yourself feeling low. My light-hearted comics open up a door that lets people know they don’t have to hide or feel shame about their struggles with self-harm or addictive behaviors—my page offers a community of support. I no longer feel useless or like I can’t help. I’ve experienced depression, suicidal thoughts, addiction, and anxiety, and thankfully am now able to share my lessons with others.

In an effort to share what I’ve learned and help others embrace self-love, I have created a mental health workbook called “My Therapist Told Me to Journal.” The interactive journal offers tips on how to deal with common mental health issues, and also has mindfulness and journaling exercises to help people detach from their negative thoughts and set reasonable goals.

Thinking back to my friends who reached out for help, I still wonder why they chose me. I don’t think it was because I was particularly nice or wise. Some of them I barely even knew. It’s possible I was the most available person who was willing to listen. So, I will keep making comics. I will keep listening. And hopefully brave people will continue to reach out for help and I will keep learning how to continue to be there for them and for myself. 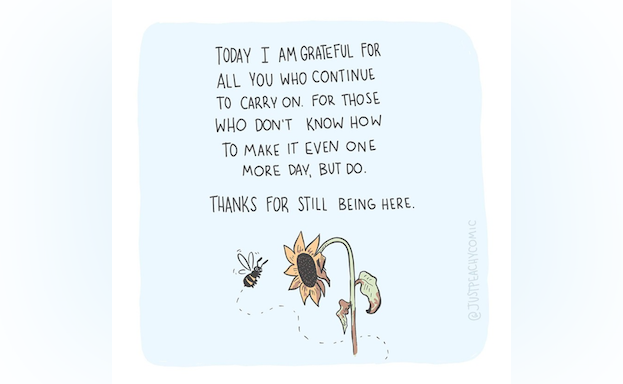