It’s more important than ever before that we make mental health and suicide prevention education in schools a priority – and the good news is that anyone can get involved in helping to advocate for it.

In December of 2021, the U.S. Surgeon General issued an advisory to highlight the urgent need to address the nation’s youth mental health crisis. The 2019 Youth Risk Behavior Survey reported that one in three high school students reported persistent feelings of sadness or hopelessness. 19% of high school students seriously considered attempting suicide, 16% made a plan, and 9% reported making a suicide attempt. For every death by suicide, families, friends and often entire communities are left shattered and reeling. You can learn here how the American Foundation for Suicide Prevention (AFSP) is helping to create a safety net to prevent youth suicide through the Blueprint for Youth Suicide Prevention.

Mental health and suicide were not topics I ever used to think about much. I certainly never thought about mental health and suicide prevention education in schools. But on December 1, 2010 my beautiful, amazing 16-year-old son T.J. died by suicide. T.J. was an outgoing, funny, kind, intelligent, sensitive, athletic boy who was always quick to laugh, smile and give hugs. Sadly, he also battled depression; but he was a master at hiding his pain behind a radiant smile.

T.J.’s death rocked me to the core of my being. My world shattered into millions of tiny fragments that could never be put back together. I had so many questions. There was so much pain. The unimaginable had happened.

One of the ways I coped was to immerse myself in learning all I could about mental health and suicide. I needed to understand how this could have happened to our family. I was shocked to learn that suicide is the second leading cause of death for youth in the United States and many youths who die by suicide are struggling with their mental health in some way – often silently.

Opening up a dialogue about the importance of taking care of mental health, and knowing how to ask for and connect to support is everyone’s responsibility. Schools play an important role in educating youth about their mental health and how to connect to resources. Research shows that when kids are mentally well, they can perform better in academics and all areas of life.

Many who experience mental health conditions like depression and anxiety try to hide their struggles because of the stigma attached to mental health disorders. Stigma is one of the biggest barriers to individuals seeking treatment and therefore factors heavily into suicide. So, reducing stigma associated with mental health conditions is a critical step to reducing suicide. This is where schools can play an important role. If mental health is discussed openly in schools, and programs and protocols are in place to raise awareness about suicide, we will save lives.

Advocacy efforts are integral to effecting change at many levels. AFSP provides access to a community of volunteer advocates all working to pass important mental health and suicide prevention policies that will make a critical difference in our culture. AFSP’s public policy team makes it easy, and anyone can be as little or as much involved as they want, from signing up at the Action Center to learn about critical new legislation and supporting it with an email, to meeting with elected representatives through public policy events like State Capitol Days and the annual Advocacy Forum. 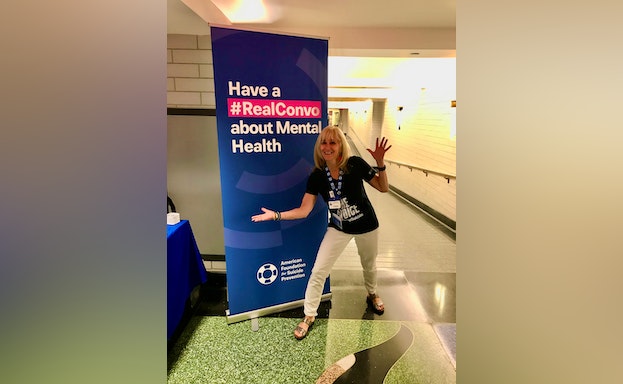 I am a proud AFSP field advocate and have had great success reaching out to schools in my community to advocate for more mental health and suicide prevention education in schools – an issue that is obviously important to me on a deeply personal level. As part of my efforts, I have been able to bring AFSP education programs into many schools in my state.

T.J.’s death left me fractured and broken hearted, but with a will to help others who have been affected by suicide. (AFSP has wonderful support services for those who have lost someone, such as the Healing Conversations program and International Survivors of Suicide Loss Day.)

I have found that in helping others, there is great healing. We all need to do what we can to encourage a culture of support, in which no one feels they are alone, and in which we all know that help is available. We all worry about our physical health, but our mental health is just as real, and just as important. Our kids need to understand that. Our schools need to be partners in educating youth about their mental health and the topic of suicide. I urge you to take up the charge to advocate for change in our schools.