I’m confused about the statistics I’ve read about mental health and suicide. Does mental illness play a role or not?

It’s a matter of approach, and how the studies were conducted. The finding that 90% of people who die by suicide have a mental health condition has been found by about 30 studies from around the world, across many age groups. The information that went into these studies is gathered using a method known as a psychological autopsy.

What is a psychological autopsy? It’s a method that gathers a large, detailed amount of information systematically from family members and friends, as well as other sources of information about the person who died by suicide or other causes of death. The same standardized interview is used for all individuals who participate in a psychological autopsy. All the information is synthesized to develop a picture of a person and their life during the months, and sometimes years, before they died.

The CDC finding, that 54% of people who die by suicide have no known mental health condition, comes from the National Violent Death Reporting System (NVDRS), which is an essential accounting of suicides and violent deaths. The data are gathered from coroners and medical examiners, police, and medical records, when available. Based on the data, a form is completed by a state staff person who fills out a standardized form and provides a written narrative. AFSP has vigorously advocated for full funding of the NVDRS across all fifty states, because we need more information about those who die by suicide, in order to help us learn how to prevent suicide.

The 54% number was arrived at by summing up the “No’s,” “Unknowns,” and missing data. So it doesn’t mean these people didn’t have a mental disorder: it just means that the police, coroner and medical records didn’t record any mental disorder in the form. It’s also not known if anyone was ever asked about the presence of a mental disorder when the information was recorded. Keep in mind that reports are completed at the time of death or close to it, which is a very difficult time for family. Some families may not, in this immediate moment after the death, have fully processed the cause being suicide, or may not know or want to admit that their loved one had a mental illness. There is also no systematic assessment conducted to get the NVDRS data, so it’s not surprising, given these factors, that there is no known mental disorder recorded for just more than half of people. 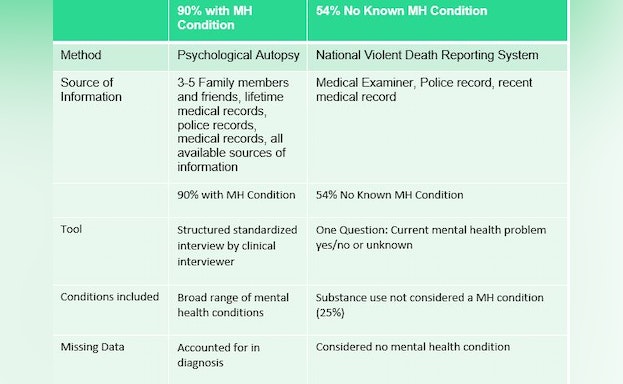